Career Examples in:
Life examples that can give you some insight on what it's like to work as:
Atmosphere Field:
Air Quality Specialist Meteorologists
Climate Field:
Climatologists
Oceanography Field:
Physical oceanographers
ECCC Career Pamphlet :
Atmospheric Science MSC Recruitment

Written By a Professional: 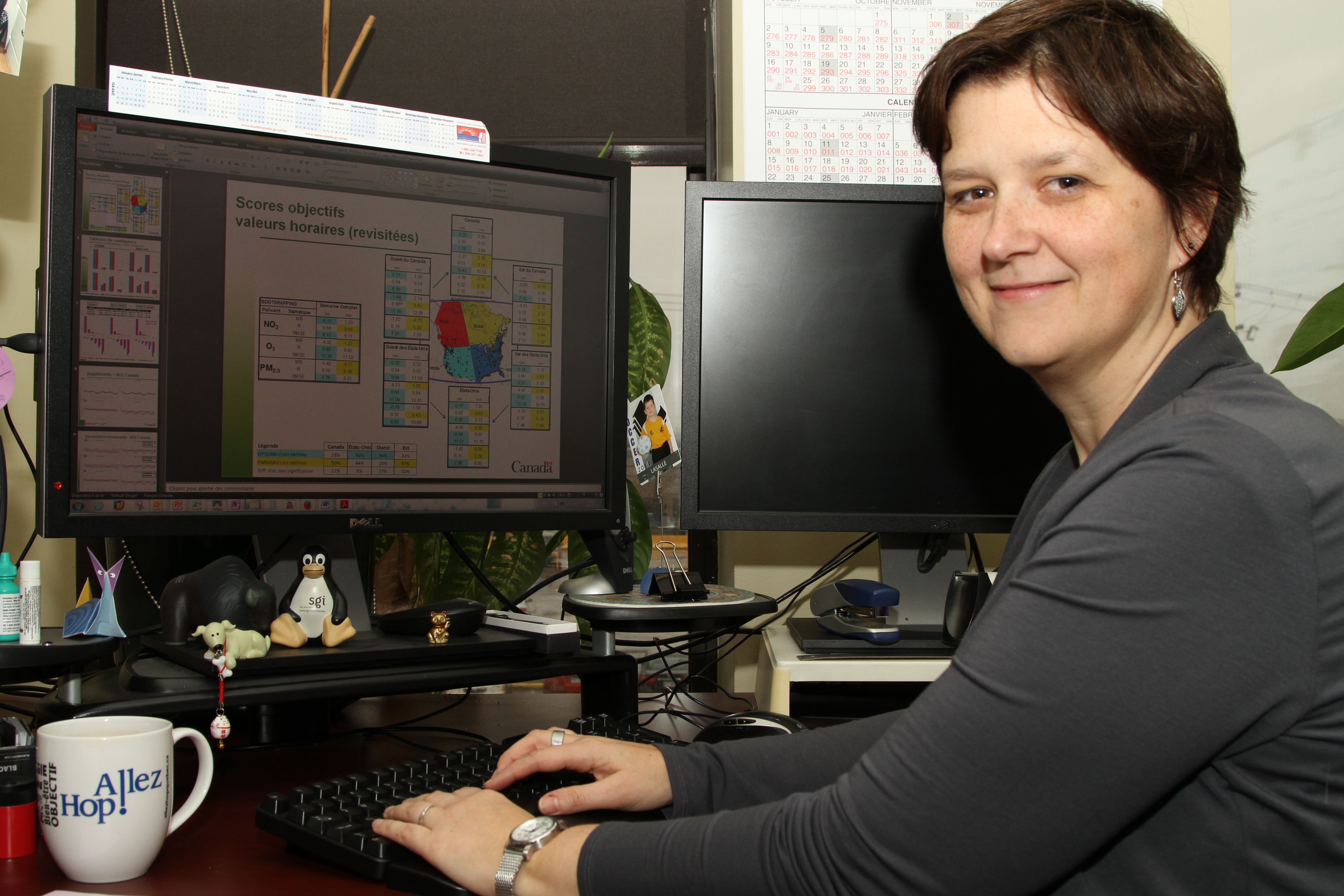 By Sophie Cousineau; If all roads lead to Rome, then I believe I represent the living proof of that with respect to career progression. Being naturally curious, I already had, in primary school, a well-developed social conscience. I remember reading in Québec Science an article that infuriated. It featured an industrial chimney that was to be extended upward for it to spew its fumes higher into the atmosphere. That way the released pollutants would not affect the local population. Little did I know then that my work would one day serve to inform atmospheric pollutant emission regulations. It became clear to me (and my parents) that science was the way to go. I thus focused my high school studies on all available science courses. In cégep, I enrolled into the science program. Since the humanities, arts, and culture also piqued my curiosity, I selected electives in law and psychology. In the middle of my pre-university studies, I went to work in Switzerland for a few months to experience new things. Then came the time to choose a study path at university. My studies were generally going well and my experience and knowledge backgrounds already proved quite diversified. Given my various interests, I faced a hard decision to make. On a whim, I decided to apply to veterinary school at the University of Montréal, and picked ecology as a second choice. I was offered admission to the latter.

What captivated me in this program was ecotoxicology, the evolution of the species and the interactions between living organisms and their environment, more specifically the beluga population dynamic in the Saint Lawrence River and polar bears in the Arctic. On finishing my studies, I interned at the Institut Maurice-Lamontagne in Mont-Joli (Québec), where I participated, among other things, in behavioural studies of the harbour seal. As strange as it might sound, this very internship brought me to atmospheric sciences. It was part of the Federal Student Work Experience Program ( FSWEP ) and to take advantage of the program, I had to return to my studies at the end of the internship which had been offered to me at the end of my undergraduate studies. Since I was still not following a set plan for the future, I decided to register in any program in order to comply with the internship terms. After looking through the list of what UQAM (Université du Québec à Montréal) had to offer, I set my sight on a graduate program called: Diplôme d’études supérieures spécialisées en météorologie (graduate diploma in meteorology). I recall thinking it would be cool to study clouds! Following discussions with the late director, Dr. Peter Zwack, I was invited to register for a qualifying-university year that would permit me to gain access to the program. Bingo! I could accept the internship, giving me a chance to find my way to a master’s degree in marine mammals, and a fallback plan.

As September neared, my fallback plan became a reality. I spent three semesters qualifying for the meteorology program by taking math, physics, and meteorology courses. Rather than settle for the graduate diploma, I opted for the master’s degree. I presented a thesis on the relative effect of anthropogenic and natural sulfate aerosols on cloud albedo based on the Northern Aerosol Regional Climate Model. I chose this project because the natural emission by phytoplankton (organisms living in the ocean) tied in nicely with my undergraduate studies and provided continuity between the two fields. This wonderful adventure, full of challenges, lasted five years and unrolled while I was also working as a meteorological technician with MétéoMédia (The Weather Network). That job allowed me to become familiar with radar and satellite imagery, data quality assurance, the issuance of air quality warnings, etc. Upon completing my master’s degree in 2002, I was hired by a former doctoral student from UQAM, who I had met while studying. She was working at the Canadian Meteorological Centre, in Dorval (Québec), and was putting together a new team tasked with modelling air quality. Since I had acquired experience in analyzing scenario sensitivity during my graduate studies, I was hired to assess cross border transport of atmospheric pollutants between Canada and the United States for the Canada—United States Air Quality Agreement . I was offered a short-term contract before I was hired as an air-quality research assistant.

I have worked 13 years on that multidisciplinary team. It grew over the years and I have climbed my way up to air-quality modelling specialist. I have participated in and headed many scenario modelling projects, either to assess the state of the science on issues related to air quality and its impact on health, or to collaborate to project information regulations such as the creation of marine emission control areas, modelling scenarios related to farming, transport, energy, or industrial emissions. Recently, in support of the development of the Canada-wide Air Quality Management System (AQMS) , the federal government initiated discussions with the provinces and territories to define Canadian Ambient Air Quality Standards . These standards were published in 2013 for ozone and fine particles, while standards for sulfur dioxide and nitrogen dioxide are in development. I currently work with a team supporting these initiatives. Needless to say, teamwork is crucial. I often need to collaborate with other departments (Health Canada, Transport Canada, Agriculture Canada) and with various colleagues within Environment and Climate Change Canada. In the last five years I had the opportunity to fill managerial positions such as head of the Air Quality Issues Unit and section chief of Air Quality Application and Modelling. I have developed a great interest for challenges that come with managerial positions. I enjoy coordinating several projects, strategically leading and guiding team members’ tasks, and finding solutions to any problem that might occur. The adventure goes on for me. I have not reached Rome yet. Neither am I sure I will ever reach it as my final destination. However, I still intend to go on working on mitigating the impact of atmospheric pollution on the environment and its inhabitants. It remains to be seen where this will take me.

I hope my meanderings will inspire those who are not following a typical or well-defined career plan. Meanwhile, try to reflect on the following few questions as they may help you find your own path: How can I benefit from opportunities that come my way? What am I really passionate about? What setbacks have I suffered that helped me go further? Who shares my values and my convictions and how can I grow my professional network?